Another Graduation, The Mothman and Another Ballpark

It all started with a question.  About 3 years ago, I received a DM on Instagram with a rather innocuous question - "Hey, do you know who Jack Wilson is?"  Little did I know that my limited knowledge of the former Pirates player would lead me to forging a friendship with someone who could quite possibly be one of the most genuine people that I have ever met.

Ever since that day, way back in 2014, I have talked to my friend, Josh, daily.  We didn't really do trading; we just talked daily about baseball and life.  I did find the first deal I made with our mutual friend, Kaleb, and I believe it is the first mention of Josh on this blog.  That post can be found here.

I learned really fast that Josh is a super nice guy, and always willing to chat.  Since our initial conversation, I have actually befriended his dad, his brother Braden, and a few of his friends (including Kaleb). 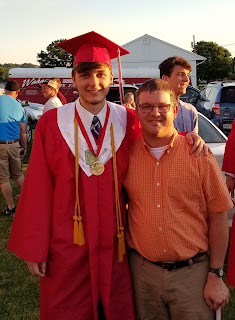 Josh mentioned something earlier this year about the possibility of making my way to his graduation and sending me a graduation announcement.  I had a chat with a friend at work about it and she said "I don't think he means you're invited, an announcement isn't the same thing as an invitation..."  Which was the same thing I thought; I didn't honestly think that Josh was serious that he truly was inviting me up for his graduation.  I mean, I knew that Josh and I had grown close over the last three years.  I figured that out when he called me while I was at the Walker Stalker convention back in December.  I had been able to hit a grand slam with his Christmas present and realized just what I meant to him.

When I did get the invitation, there was also a full-page letter from Josh thanking me for always being there for him and being a good friend.  He had also given me an 8x10 of his senior picture, which he signed and inscribed "To Will, a great friend" well before the graduation invitations had been printed.  I oftentimes have problems realizing what folks think of me, but Josh clued into that early on and has made it very clear how he feels about our friendship.

I admit, I was skeptical about driving all that way to his graduation.  I have gotten flack from folks in the past about the "friends" I have made on Instagram, Facebook, etc.  However, I met his dad when I had Skyped Braden a while back and saw that their dad is just as nice as they are.  When I pulled into the driveway on Friday, I was greeted by their dad and also Braden.  The first thing Josh's dad did when he saw me was give me a huge hug.  I instantly felt like a member of the family.  I talked to Josh's dad for quite a while, then finally met his mom.  She was equally as nice, but I didn't get much of an opportunity to talk with her, since she had to work the rest of the time I was in town. 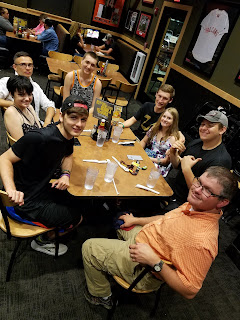 During my friendship with Josh, it has been apparent that he likes to spread the word about me, so several of his friends have followed me on Instagram, Facebook and Snapchat.  I was able to watch a bunch of them graduate as well.  After the graduation, a few of us met at Buffalo Wild Wings, where Josh treated me to dinner.  Even though the service was really slow, we had a great time, and were all able to chat quite a bit. 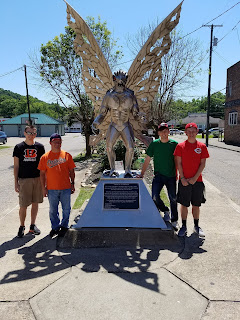 Since his graduation was on a Friday, I made a weekend of the trip.  We decided early Saturday morning to go to Cincinnati for a Reds game, since they were the only major or minor league team in the area that was home that day.  Also, the Reds are Kaleb's favorite team, so it worked out even better.

On the way to Cincy, we drove through Point Pleasant, West Virginia, home of the Mothman statue.  I'm not going to go into too much detail, since I haven't seen the movie in years, but the legend of the Mothman, and the bridge which collapsed all took place in that town.  I actually drove over the replacement bridge several times this weekend.  I'm no fan of Richard Gere at all, but that is one of the two movies (the Jackal being the other) of his that I enjoyed.  The Mothman is creepy as hell, I recommend you watch it. 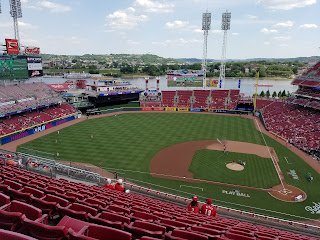 We made it to Cincinnati without running into Richard Gere, to the fifth MLB ballpark that I have been able to visit, and second this year.  Great American Ballpark is a really nice place.  It was a bobblehead giveaway day, and a decent-sized crowd was on hand to watch the Reds and the Braves. 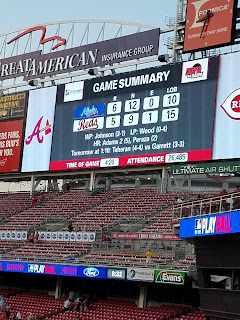 The Reds lost to the Braves in extras, but we did get to see a grand slam, and I got to see Nick Markakis play.
We all had a great time at the game.  The 2.5 hour drive made for a nice road trip for the four of us.  Braden sat up front with me, since I did all of the driving.  The banter back and forth across the trip and at the game would have made for a great podcast, as everyone in the car had a great knowledge of baseball, music and sports in general.  The guys were even treated to a karaoke jam by me, since Braden put on some Guns N Roses, and I can never resist singing along.  I hope the guys' ears have stopped bleeding by now. 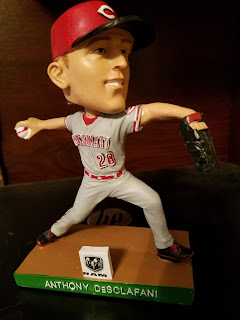 I've tried to temper my excitement on here when I meet new people and feel like I have made a new friend or two.  All too often, folks have come and gone for various reasons, and I end up feeling rather foolish for spending time writing posts about how 'so and so' is a 'good friend', only to have them stop talking to me after a while.  I do have some folks who have lasted, like Drew, Andrew, Max (in Chicago), and a few others.  I know when I post my entries on here, they become public, but this blog really is a diary of sorts for me.  I do have some really good friends that I have met through here, on Instagram, at shows, etc.  I don't want to hurt anyone's feelings because I don't mention their names on here, or they don't get a full post like this one.  I do, however, feel the need to shine a spotlight on Josh, Braden and Kaleb, because they truly have been amazing friends to me the last few years, and I am very humbled and grateful that they all were excited that I was able to come up this weekend.

I spent the majority of the time talking about Josh, but I was also there for Kaleb, who I talk to often, and is an amazing person in his own right.  I'm very proud of the job he did, as well.  I was happy to finally meet Jared (who I have the longest snapchat streak with out of the group, lol), Jimmy and Tanner, and see these guys graduate as well.  I was happy to finally meet Kaleb's mom, even though we didn't get to talk for more than a few minutes; and also Kaleb's older brother, who is just as nice as he is.

So, I wanted to take the time to thank Josh, his dad Eric, his mom Susan, Braden, Kaleb, Jimmy, Tanner, and Jared for being to hospitable to me this weekend, and for wanting me to be present at this huge moment in your lives.  I am glad that I could have a positive influence on you guys, and I hope we can maintain our friendships for a long time.  I'm proud of you guys!

Apparently, I am invited back two years from now for Braden's graduation, if I didn't wear out my welcome this weekend.  I hope I can get up that way (or get all of them down here) well before then.
Posted by William Regenthal at 9:13 PM