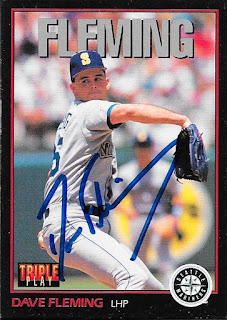 This was a really cool TTM success.  Not becaus Dave Fleming was a star, or anything like that.  It was a cool TTM success for me because it was already set up by someone else, somewhere in Kentucky.  When I was on my trip to see Andrew for his graduation, he and I stopped at a card shop in Bowling Green and searched some boxes.  There were a bunch of Fleming cards all together, so I checked to see if he signed TTM.  I saw that he did, so I bought 5 of the cards and when I got back home, I sent them out.

The cards are rather pedestrian, but I thought it was still something really cool, and it tied back into my trip.  THe above 1993 Triple Play turned out really nice.  I remember opening up a bunch of packs of 1992 and 1993 Triple Play; this was one of the first products I was able to afford a full box of, back in the day. 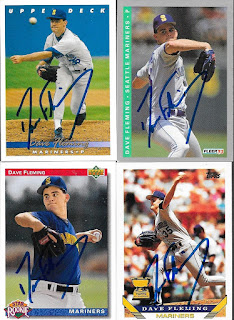 I added one card to the Topps project, the bottom right 1993 Topps.  I also have a 5,000-count box of 1993 Fleer, but rarely am able to get into it, as it is on the bottom of all of my other boxes.  The two Upper Deck cards turned out nice, I think.