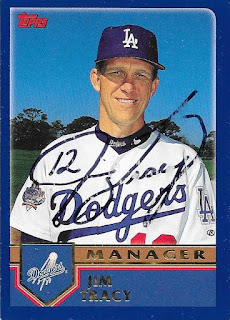 I added some early 2000s cards with this success from former Dodgers manager, Jim Tracy.  I haven't added a 2003 Topps in quite a while, mainly because I don't have very many available.  I need to pick up a box of them and bust it so I have more to choose from.  This one didn't turn out all that great, though.  I don't normally rub up or powder base cards, but I think 2001-2003 Topps might need it. 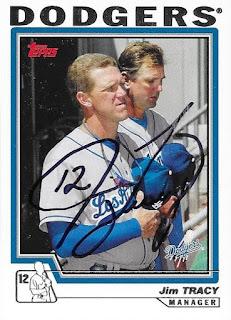 This 2004 Topps turned out much better.  I probably was the first one Tracy signed, then he went to sign the 2003 and put them together, causing the 03 to mess us a bit.  That's my theory at least.