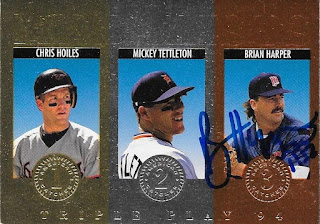 This TTM success from former catcher, Brian Harper, provided me with some really nice 90s gems for my binder.  Although it might be hard to get the other two guys on the above 1994 Triple Play Medalists, I had to get this into my album.  I remembered when these came out back then, and loved pulling them from packs.  This was the era when a foil card was considered a "hit", so these were a big deal. 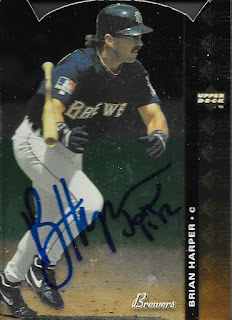 This 1994 Upper Deck SP die cut also turned out really nice.  It looks better in person that the scan shows. 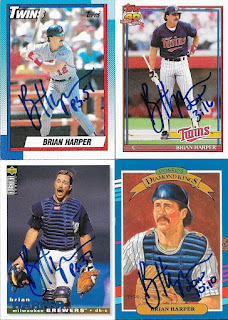 I wanted to add a few Topps cards to my sheet, so I picked the 1990 and 1991.  I liked the 1995 Collectors Choice because of the look on Harper's face, and really, I liked that set a lot back then.  It was cheap and you could bust a ton of boxes looking for the gold signature cards.  I also liked adding the 1991 Donruss Diamond Kings. 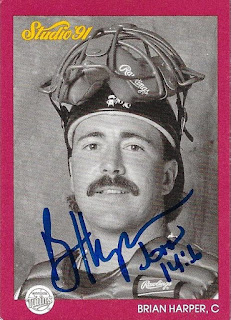 Finally, any time I can add a 1991 Studio to the collection is a good time.  These were really nice cards back then, and I don't see too many of them these days.

I mailed to Harper via the Toldeo Mud Hens on April 3 and got the cards back on June 22, for an 80-day TAT.
Posted by William Regenthal at 6:55 PM