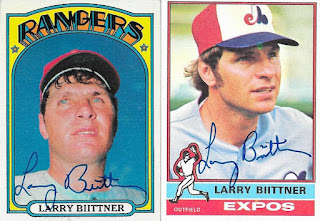 I sent cards to my very good friend, Max, a few times to help him do some IP graphing around Chicago.  He had a paid session with former outfielder Larry Biitner and got these two cards signed for me.

I raided my 1972 set for the card on the left and the 1976 on the right came out of my box from Columbia.  They both look pretty cool, I think. 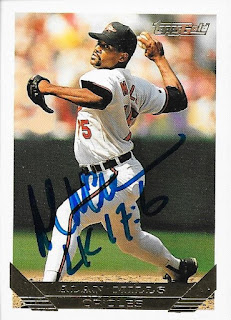 I also sent Max some Orioles cards so he could 50/50 them while they were getting beaten by the White Sox in Chicago.  The only person who would sign for him was Alan Mills, and Max kindly sent me back all of the autos, which he didn't have to do. 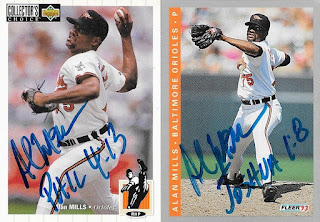 Mills and Roger McDowell had better find some magic cure for the Orioles terrible pitching staff, and soon, because their jobs might be on the line very soon. 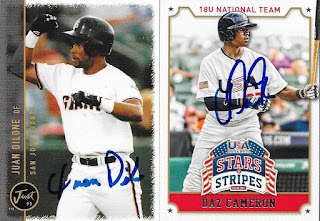 Finally, Max hit up a minor league game and got me some autographs from the Astros Single A team from Quad Cities.  I sent him an assortment of Daz Cameron cards, and these are the ones I got back.  He also sent me this Just Minors Juan Dilone to go along with everything. 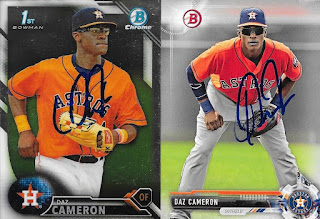 The Camerons came out really well.  I have come to the realization that I really love the design on 2016 Bowman and Bowman Chrome.  They look really sharp! 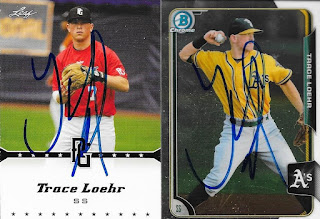 Finally, I had found two Trace Loehr cards to send along to Max, and he sent them both back to me signed.  I was expecting him to keep the 2015 Bowman Chrome, but it came back as well.  I had the Perfect Game cards for a while.  I have wanted to pick up some more packs of it, but it is a pretty high price point, but there are guys in there who are graphing in the minors.

Thank you so much for getting these cards signed for me, Max!  I really appreciate it!
Posted by William Regenthal at 9:46 PM