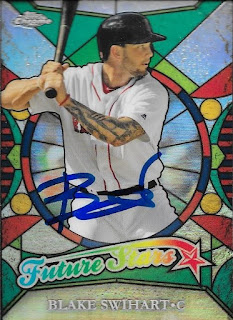 Ever since I have been able to graph the Down East Wood Ducks, I have had folks wanting to do some 50/50s here and there.  A 50/50 is an agreement between graphers to send x number of cards to the grapher for teams that they will be seeing.  Grapher gets the cards signed.  They can keep half of the cards for themselves, and the person providing the cards gets the other half in return.  I have been doing 50/50s with Max for a while, but now, with the Wood Ducks in town, I have accepted and sent out a ton more.

My good friend, Gerard, has sent me a bunch of cards for the Wood Ducks, but has also accepted cards of the Pawtucket Red Sox.  He sent me a huge package the other day with some of the results from his latest trip to a PawSox game.  The above Topps Chrome Blake Swihart might be the best card of the bunch.  This one looks so awesome in person. 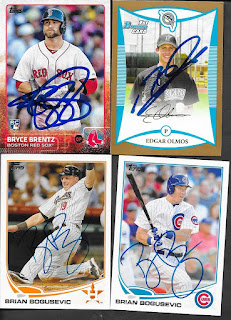 Pardon my cards slipping on my scanner.  Gerard hooked me up with some nice autos on some more recent Topps cards.  The Brian Bogusevic cards were really nice.  I was able to get an extra Cubs one, and will pass that on to Max. 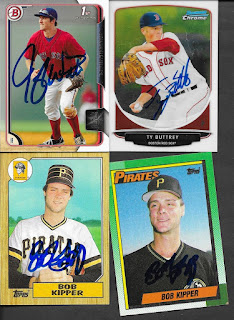 The 1987 Kipper adds yet another card from that set to the binder.  I had more Ty Buttrey in the past, but those ended up going out to a few Red Sox fans in the past. 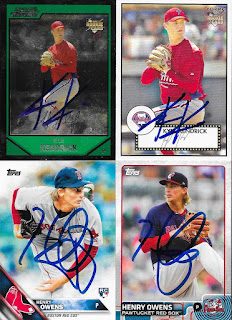 I really like 2015 Pro Debut, so I was happy that Gerard was willing to send that Henry Owens back to me.  I thought I had more Kyle Kendrick, but I was only able to find four cards.  Thankfully, one of the ones I got back was the Bowman Chrome.  I have a ton of cards from that set, but haven't been able to get any signed, until now. 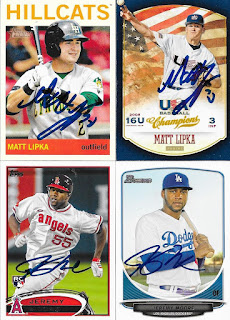 Finally, I got some cards signed for Gerard at the Wood Ducks games a few weeks ago.  Matt Lipka has been the hardest player that I have tried to get at Grainger Stadium.  He had blown me off so many times, I'm starting to think he owes me dinner and a movie.  Seriously, though, he is tough to get, so I had to wait around after a game to get him.  I have 5 cards left of the 50/50, so I may wait around after another game soon, then not accept any more Lipka cards for anyone else.

On the flip side of that, though, is Jeremy Moore.  Moore is super nice, and my son, Chris really likes him.  Moore (b. 1987) played in the majors in 2011 for the Angels.  He was drafted out of high school in Louisiana in 2005.  He appeared in 8 games for the Angels in 2011.  He collected one hit and retired with a .125 batting average.  Jeremy is a class guy and I always love chatting with him at games. 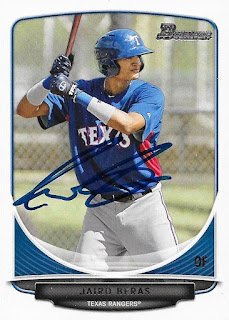 Jairo Beras has since been demoted to Single A Hickory as he makes the transition to pitcher.  He hasn't hit much since signing a nice contract out of Cuba, so the Rangers are trying his arm out.  I hope he is successful.

I have another batch of 50/50 cards that I am working on with Gerard.  I hope they come out as nicely as these.
Posted by William Regenthal at 7:10 PM