Another TTM Success From Aaron Altherr 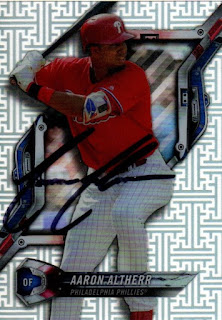 Aaron Altherr had responded to a previous TTM request back in 2019, but I had to send to him again after I gathered these three cards.  The above 2018 Topps Hi-Tek was what sold me on sending again, and the card looks awesome.  These are some of the best cards to get signed, and I was glad I had found this one. 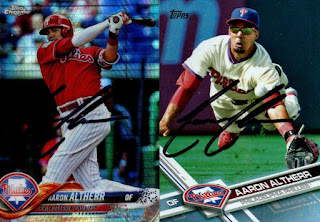 I also had the above 2018 Topps X-Fractor and 2017 Topps Rainbow Foil that went along for the ride and came back looking great.

I mailed to Altherr on February 15 and got the cards back on March 1, for a 14-day TAT.

Posted by William Regenthal at 7:51 AM