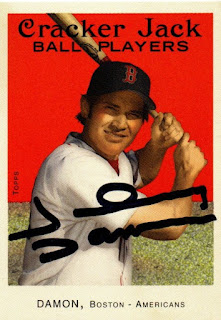 This was a big one.  It was also a TTM success that I had waited quite a while for.  In the end, the wait was worth it, I got a TTM success from Johnny Damon.
The above 2004 Topps Cracker Jack card looks amazing.  I'm so glad I sent that one along. 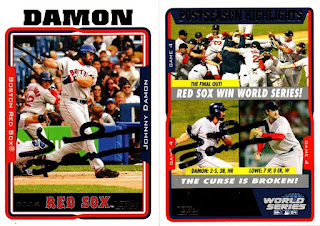 I also got these two 2005 Topps cards signed, which turned out really well.  He didn't sign my 2007 Topps Opening Day, but I'm not complaining.

Posted by William Regenthal at 7:20 PM

That's a long return time. Big fan of Royals Johnny Damon due to my college roommate and I hyping his name up during baseball highlight shows.