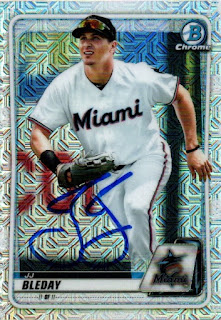 Last season, I took a week off and tried graphing arrival at the Durham Bulls when the Gwinnett Stripers were in town.  I felt like I did pretty well, so this season, when Chris was on Easter break, I took another week off of work to try to get some autographs from the Jacksonville Jumbo Shrimp.  Chris had a half day of School on Wednesday, so it was Alex and I going on our own, and we didn't do too badly.  We went again on Thursday, with Chris along this time and did about the same.  Each of those days, we made the trip back to Kinston for the Wood Ducks games at night, so we were double dipping on some graphing for the week.  We took Friday and Saturday off from going to Durham, so we could focus on the Wood Ducks, then with the Wood Ducks off on Easter Sunday, Alex and I caught a game in Durham and did arrival, inside pre game and outside post game.  In all, we scored a ton of autographs and I won't have to put much back into the Box of Shame.
We got JJ Bleday on three of the same card.  Alex didn't want to keep any of his autos, so I will send one of the cards to a friend of mine, while Chris will get the third, if he wants it.

Max Meyer was a strict one-per, so I got him the first day and Alex got him the second day.  Chris couldn't flip his pages fast enough, so Meyer skipped him when he was there, but signed a second card for me Sunday night.  I made a lot of mistakes on this trip, one of which being taking Meyer out of Alex's book.  I have no idea why I did that, otherwise, I'd have finished off another card (probably the base "In Action" card).  The blue parallel "In Action" card was a gift from Jessie, and when Meyer asked me which one I wanted signed, it was an easy choice picking that one.  We met a grapher from Norfolk when we were there on Wednesday named Clifton.  He seemed like a nice guy, and helped Alex and I try to identify the players.  Between the three of us, we did pretty poorly and had to resort to asking a lot of them what their names were.  Clifton picked the wrong guy who looked like Meyer; it turned out to be Jeff Brigham, and elicited a laugh from Brigham. 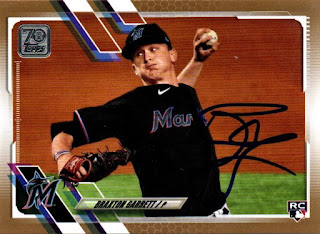 I got extremely lucky by picking out Braxton Garrett on the second day that we were there.  He signed everything we had, including the above 2021 Topps gold parallel that I found when I was thrashing searching for cards.  Funny thing is, I couldn't find a 2021 Topps base of him. 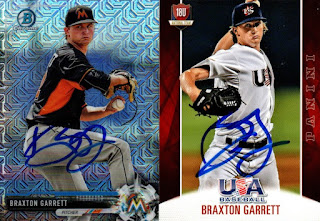 Alex really liked the 2017 Topps Chrome mojo parallel with the orange M logo on Garrett's cap.  The 2015 Panini USA card was in a random box of USA stuff that I got from my former LCS, so it was nice to get it signed and into my album. 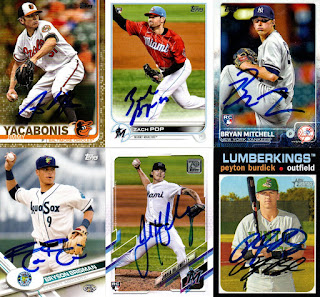 I'm glad I was able to get a few parallels signed during this trip, like the 2019 Topps gold Jimmy Yacabonis.  I had send off my extra Zach Pop 2022 Topps to him TTM at Spring Training, which hasn't come back.  I didn't have any extras, so I raided my completed sets that I had sitting by my desk, with replacement cards coming from Gerard sometime soon. 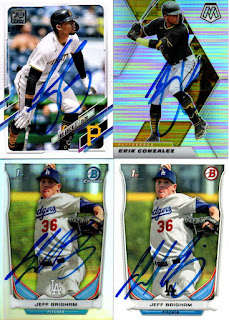 I was happy to get a 2021 Panini Mosaic signed by Erik Gonzalez.  He also signed the one 2021 Topps Update of him that I could find.  I was also glad to get some 2014 Bowmans out of my box and signed by Jeff Brigham. 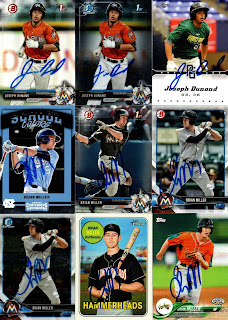 When I say that I'm happy getting cards out of my boxes and signed, I am especially ecstatic when I can move a few 2013 Leaf Perfect Game cards.  I saw Joe Dunand's name on the roster and immediately remembered that he was in 13 Perfect Game, so I pulled each and every card from the box.  I was also happy to move some of the many 2017 and 2018 Bowman Dunands and Brian Millers that I was able to find. 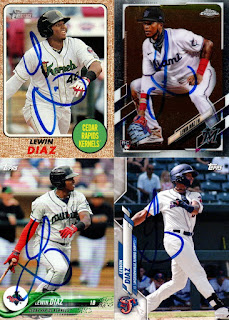 Lewin Diaz didn't speak much English, but I was able to get most of his cards that I brought signed.  I think I missed only one, and he probably didn't realize he was on it, it was a 2021 Topps Heritage Marlins Rookies card.  I like that his signature is a giant L.  It definitely is one of the different autographs that I have seen. 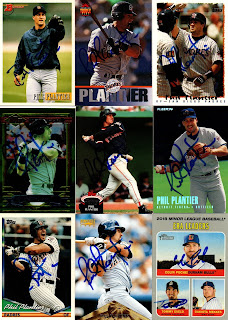 Phil Plantier was really cool.  He signed everything we had, even going "Oooh" when he saw my 1994 Topps Finest.  He also told us a story of how one of his minor league teammates was in Bull Durham, which was cool.

I spent most of Sunday hitting up the Bulls side of the stadium, finishing a couple team set cards.  Ryan Boldt was the only graph we got inside, but well worth it.  I had missed him several times in Durham, so I was glad to finally add him to the autograph album. 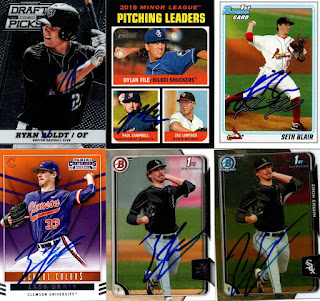 What I like about AAA is that you find a lot of players who have cards from a while back, like the 2015 Bowmans I got signed by Zack Erwin or the 2013 Panini Prizm Ryan Boldt. 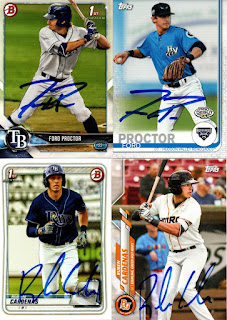 Ford Proctor was really nice.  I had a hard time recognizing Ruben Cardenas.  He didn't really look like his card, but he also wasn't running toward us like he is on the card, so cut me some slack.  We had help identifying him on Sunday and got all of my cards signed.

Nike Hulsizer was very easy to recognize; from the cool shades to the dreads, the nose piercing or the hoverboard he rode in on.  He signed everything we had and was really cool to a group of kids who were asking for his autograph inside the park. 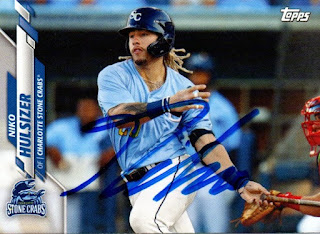 I wiped out almost all of the Hulsizer cards that I had, save for two I left in Chris's book. 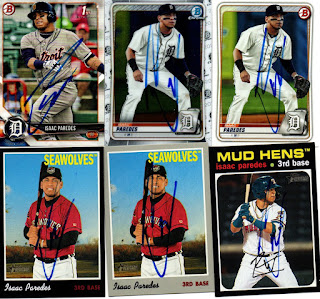 By Sunday, the player I was really focusing on getting was Isaac Paredes.  I had the 2019 Topps Heritage Minors black parallel numbered to 50 and I really wanted to get it signed.  He has a pretty horrible autograph, but I still wanted to get it done.  I had gotten him pre-game, and he signed around the card, so I was determined to get him after the game.  All of the graphers at the game headed to the Durham side after it seemed that all of Jacksonville had gotten on the team bus.  The graphers were focusing on Vidal Brujan, who wasn't there, it seems.  One of the graphers told me that we had missed Paredes coming out of the stadium, but I didn't believe them, because the group they thought he was with didn't seem to have a guy with them who was as big as Paredes.  So, they all gave up waiting for Brujan, which left only Alex and I outside waiting.  He was cold and ready to go, so I told him that we would give it 15 more minutes.  We didn't even have to wait one, because as I turned around, there was Paredes leaving the clubhouse, and I was able to get him on the parallel.  I'm glad I waited.

In all, Alex, Chris and I, across three days, were able to get the following autographs:

Posted by William Regenthal at 11:33 PM