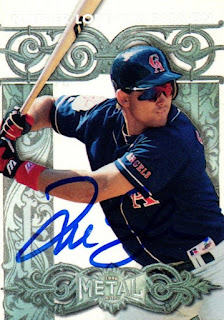 This 1996 Fleer Metal Mother Lode card of Tim Salmon sat in my TTM box for a long time waiting for a private signing to come up.  I just liked the look of the card, and hoped that I could get it signed and into my autograph album at some point.  Thankfully, I kept it close by and when the signing finally did pop up, I was ready.  The card turned out great, and I am glad I was prepared to send it in.

Posted by William Regenthal at 7:50 AM

One of my favorites from that time, awesome!