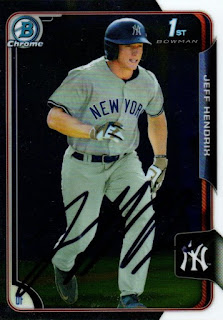 Another random Bowman card was added to my autograph album when I got this 2015 Bowman Chrome back signed by Jeff Hendrix.  He signed the card in black Sharpie, and it looks pretty nice.

I mailed to Hendrix on February 4 and got the card back on March 5, for a 29-day TAT.

Posted by William Regenthal at 7:36 AM