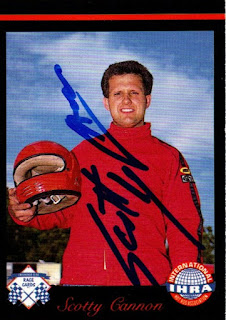 Due to the MLB lockout, the usual graphing of the Wood Ducks Hot Stove event in January was canceled.  I had to wait until February to get some graphing in at the induction ceremony for the North Carolina Drag Racing Hall of Fame.  The big name on this year's class was that of Pro Modified legend, Scotty Cannon.  One of my heroes when I was growing up, I had to be there for his induction. 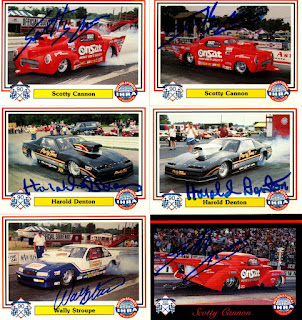 I ordered some single cards off of COMC, and also a couple complete sets of 1990 Checkered Flag IHRA.  I ordered one for me, and one for my buddy, Gerard.  While I was at the event, a new friend convinced me to get one for him, as well.  I befriended the son of one of the guys who used to race against my dad and bought him a set, since he liked the one I had so much.  He got the set in the mail a few weeks later, along with an assortment of signed baseball cards and a Down East Wood Ducks team set from 2021.

Finally, Chris went through the autograph line and got his grandpa to sign a couple of his cards (above).  I buy these off of Ebay when I see them.  I've given a few away to friends.  These two came out of the set that I bought for myself.  Chris also got Gerard's two cards signed.

In all, we got Dad x 4, Scotty Cannon x 8, Wally Stroupe x 2 and Harold Denton x 3, for 17 autographs on cards.  I had a great time at the ceremony and hope to go again next year.

Posted by William Regenthal at 5:26 PM

and you got to spend time with your momma 😜