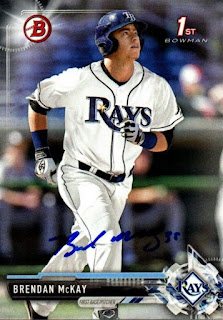 Graphing season is about to start up next week, and I have been thrashing to get some stuff together for an early-season series out of town.  In doing so, I had to search for a snap case of cards I didn't get signed last season, which led me to go through a ton of stuff on my desk.  I realized that I had a ton of stuff that still needed to be scanned and blogged.  That means I'm going to have to start back doing blogs at least twice a day to knock down some of the non-TTM stuff I have sitting here.  The first of which was a stack of cards I got back from Andrew while we were at the National. 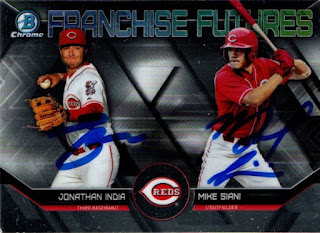 Andrew actually had these cards since at least the 2019 season, when Chris and I visited him in Evansville.  He was going to get Wander Franco on a ball for me that year (he did, thanks, Buddy!) and also took some 50/50s.  COVID messed up us meeting in 2020, so I had to wait til the 2021 National to collect some of the cards he had waiting for me.  The above completed dual of Mike Siani and Jonathan India is one I actually forgot about, but was happy to see in the stack.

I'm pretty sure all of these came from Andrew.  The problem was, stacked fall over from time to time, and stuff gets mixed up.  I remember him giving me the Amir Garrett 2016 Heritage Minors and the Harrison Bader 2017 Bowman.  He maybe had the 2015 Naquin as well, or I may have picked it up, myself.  Andrew can tell me, but I think he did give it to me.

So, I'm hoping to reduce this stack of non-TTM autos in the coming days, but the fun part is that there is some nice stuff that I completely forgot about.  I guess that's a sad thing to say about the condition of my desk.  Thanks for the cards, Andrew!