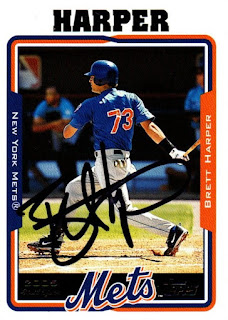 Here is a random 2005 Topps that I was able to get signed TTM recently.  This Brett Harper card turned out nicely.  I don't have very many bulk 2005s, so I don't send many off.  I think I let a lot of the bulk stuff from around this time go to a buyer at a show in Raleigh a while back.  I don't regret selling the bulk off, because it makes room for more stuff, but sometimes I do wish I had more of some of these mid-2000s years.

Harper (b. 1981) was a 45th round pick by the Mets in the 2000 June Amateur Draft out of Desert Mountain High School in Arizona.  He played professionally from 2001 to 2013 and from 2015 to 2016.  He spent time in the Mets, Giants, Blue Jays, Dodgers and A's systems.  He also spent time in Mexico and Japan.  He reached AAA in his time in the minors, but never cracked the majors.

Posted by William Regenthal at 10:58 AM