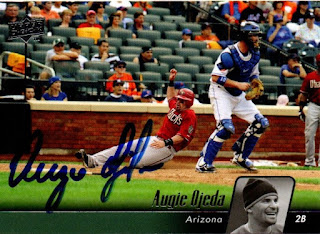 This 2010 Upper Deck that I got back signed TTM from Augie Ojeda turned out really well.  This was the first set that Upper Deck produced that was without team logos, but wasn't all that bad.  I remember busting packs of these and a good many of them were loaded with patches and autos, because Upper Deck had to offload a bunch of stuff since they were in a lot of trouble in the industry.  I have a bunch of base left of 2010 UD, so it is nice to get rid of some from time to time.

Posted by William Regenthal at 11:18 PM

Augie was a fan favorite in Chicago, nice TTM!