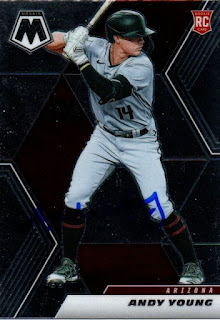 Hopefully, there will be a wave of current players being added to my autograph album from the mass of Spring Training TTMs that I sent out recently.  Before that, I sent a few TTMs out to some current players, like this one from Andy Young.  He signed the above 2021 Panini Mosaic and the below 2021 Topps rainbow foil in blue Sharpie. 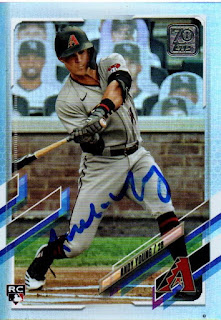 Young (b. 1994) has played in the majors since 2020, for the Diamondbacks.  He has 24 hits, 7 home runs and a .205 batting average.  He was originally drafted by the Cardinals in 2-16, but was part of the Paul Goldschmidt trade and was shipped to Arizona.  Arizona released him in December 2021 and he was picked up by the Nationals off of waivers.