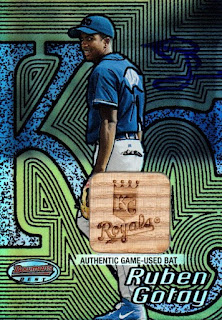 Because Rob Manfred seriously jacked up the minor leagues, opportunities to graph Orioles prospects in Kinston have become a lot harder to come by.  This season, unless I go on the road, I won't see Delmarva at all.  I missed a couple classes of Oriole prospects the last couple of years, so when I saw that I could catch Aberdeen in Greensboro this past weekend, I hit the road.  The High Point game on Saturday supplanted a possible 2-game viewing of Aberdeen, but the graphing at the Rockers was well worth it.  That left me with a 2PM game on Sunday in Greensboro, which ended early enough for me to get home at a reasonable time.
One of the key cards I wanted to see signed at this game was the above 2002 Bowmans Best Ruben Gotay relic card.  I found it on Sportlots for a steal, not knowing it was a relic card.  It looks awesome, even though Gotay's autograph isn't much to look at. 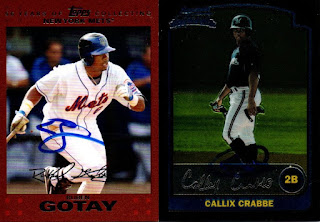 I realized this morning that I had several other Callix Crabbe and Ruben Gotay cards that I had ordered, then mistakenly put in the wrong stack.  So, I will have to go back to Greensboro to get those taken care of. 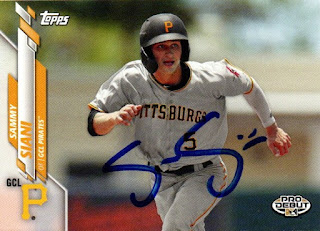 The graphing of the Grasshoppers was a big case of missed opportunities.  One guy I missed last season when I went was Sammy Siani, whom I finally got on this 2020 Topps Pro Debut.  I ran into a fellow grapher that I see from time to time, and he showed me three other guys with cards that I just flat out missed when I was searching my boxes.  Oof.  Better luck next time. 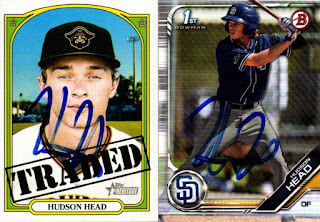 Another oof was that I paid $20.00 to get Hudson Head TTM a couple months ago.  If I knew then that I would see him in Greensboro (and get the same card signed), I would have saved the money.  Oh well. 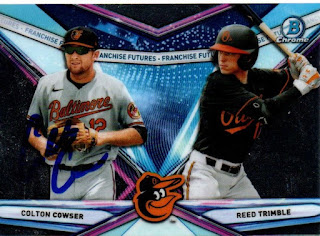 My mistakes aside, I was very successful in graphing Aberdeen.  I only ended up with one unsigned Orioles card, and that was an extra of last year's first round (#2 over all) pick, Colton Cowser.  He was one-per inside, and signed again for us outside (again, one per).  The above dual with Reed Trimble was the card he signed outside. 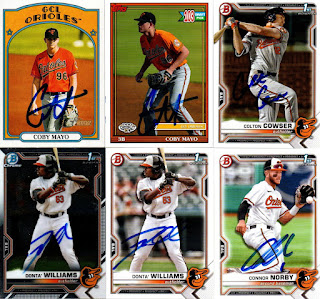 Coby Mayo signed every card I had in my book.  I only had one 2021 Bowman draft base card of former ECU standout, Connor Norby.  Donta' Williams signed 2 cards inside and my remaining card outside. 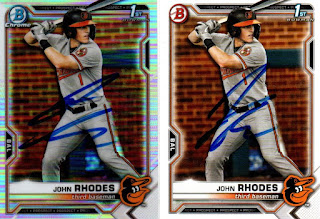 Finally, John Rhodes was one-per inside, then signed my remaining two cards outside.  I ended up with a couple extras of the Aberdeen guys.  All of them were pretty nice.  I gave Norby a little bit of crap outside, since he went to East Forsyth High School.  I went to West, so I had to represent.  We laughed about it.  He seems like a really nice guy.

I enjoyed Greensboro, even though I messed up a bit and didn't bring all of the cards I needed.  The good thing is, the field is close, so I can always go back later this summer.  In all, I got the following autographs:  Colton Cowser x 2, Donta' Williams x 3, Connor Norby x 1, Coby Mayo x 4, John Rhodes x 3, Sammy Siani x 1, Hudson Head x 2, Callix Crabbe x 1 and Ruben Gotay x 2 (19 total autographs).

Posted by William Regenthal at 10:37 PM