Last Bit of Autos From The National 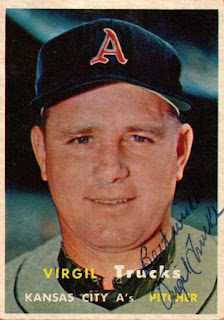 As far as I know, this is the last of the stuff that I brought home from last year's National.  It only took me about 7 or 8 months to get it all posted.  There were a couple vendors at the show who had some nice, cheap cards signed by deceased former players (and one other), so I figured I would grab a few for my album.  For some reason, I never sent the above 1957 Topps to Virgil Trucks for him to sign.  Whenever I see a Trucks card, I usually pick it up, and this one was no different. 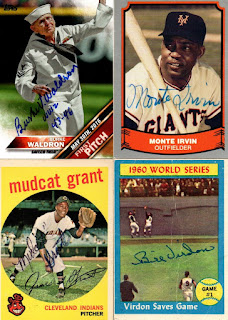 I got the Burke Waldron (above left) cards from the Signatures for Soldiers.  I wanted to send one TTM, but Waldron passed away before I could.  I also liked the Monte Ivrin 1988 Pacific, 1959 Topps Mudcat Grant and 1961 Topps Bill Virdon 1960 World Series Highlight.  These were all cards I would have liked to send out back then, but didn't get a chance (probably because I didn't have extras of said cards).

I'm hoping to signer list for the National comes out soon.  I'd like to start pulling cards for those guys as soon as possible.  The days will be flying away, and July will be here before I know it.

Posted by William Regenthal at 12:41 PM

That Burke Waldron is super cool. A fellow blogger generously sent me a signed copy of that card and it'll be a signature I'll forever treasure in my collection.