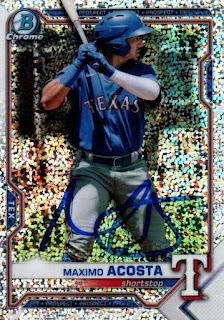 The Wood Ducks home opener was this past week, and I finished off all of the cards I had for Kannapolis by the double-header on Saturday.  I also knocked out a few more Maximo Acostas.  The above speckle parallel turned out nicely, and scanned amazingly. 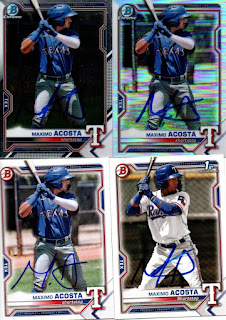 I don't want to blow up Acosta, so I haven't presented many cards to him to sign.  I got quite a few during the series, since Alex was in town, and Chris was able to go to the games. 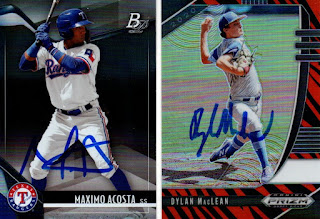 I took a few 50/50s, and the ones that had come in by the time the series came around were from my good friend, Gerard.  The above 2020 Panini Prizm tiger stripe parallel of Dylan MacLean is numbered 1/99 and looks awesome.

For whatever reason, I had a hard time identifying Brooks Gosswein.  I finally was able to get him to sign on Frida, after a funny conversation with Jared Kelley (an amazingly nice guy) and another of the Ballers pitchers.  As I was talking to Kelley about not being able to find Gosswein prior to the other three games, a pitcher walked up and said I'm Brooks.  Since another of the pitchers said he would sign as Brooks for me, I figured this was the same case.  I told him "Hey, if you tell me you're Brooks, I'll take it."  He asked "You don't believe me?  What does my glove say?"  It said Brooks Gosswein.  He was very nice and signed all we had.  He stayed to chat for a few minutes about the cards I had brought and apologized for my not being able to spot him; it turns out, he was working out one night and was with a trainer another and I really just missed him. I added a new James Beard to the autograph album with the above 2021 Topps Heritage Minors card.  Wes Kath was one per, but was pretty nice.  I had a conversation with Adisyn Coffey about his time spent in Mount Carmel, IL, since my awesome friend, Andrew, is from there.  I also got one of Andrew's cards signed. 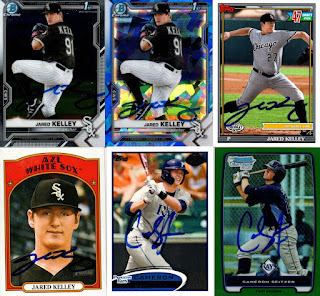 I added a bunch of Jared Kelley cards to the album, and got every 2010 Topps Pro Debut that i had of Cam Seitzer signed.  The 2012 Bowman Chrome green parallel of Seitzer was a card I found on Sportlots. 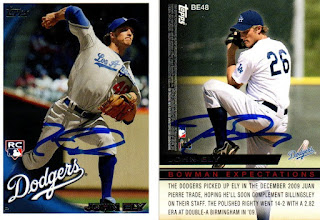 John Ely was awesome as always.  He is very friendly, and chatted with me a bit each day. 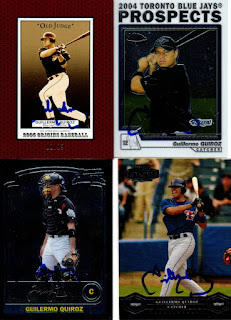 I was out of Guillermo Quiroz cards, so I ordered a bunch off of Sportlots.  He signed everything across a few days, and I am glad to add some of these cards to the album.

Quiroz has a lot of nice stuff, from an era where there were a lot of sets being made.  I'm glad that I picked up what I did. 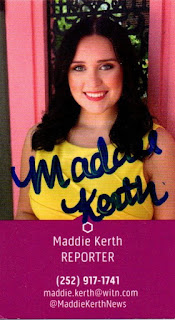 Finally, on Tuesday, I was interviewed for WITN news about opening night and collecting autographs.  Fellow grapher, Jessie Jones, was also interviewed.  It was a lot of fun, and I was able to call out Chris for making my buy Nick Lockhart hot dogs last season (and Chris telling Nick that he was the one paying for them).  Maddie Kerth was the reporter who interviewed us, and as a gesture that I thought up, I told her that we would take her business card, only if she autographed them for us.  She thought that was a really funny/cool touch and obliged with a signature.

Click here for the link to the interview that aired Tuesday night.  Even my buddy, Alex, made a cameo in the wide shot of where we were sitting.

The Wood Ducks split the series after splitting the double header Saturday night.  Stick around to see what Alex, Chris and I did prior to the Wood Ducks games this week, and on Sunday when they were off.

Posted by William Regenthal at 4:57 PM

The news interview was awesome!