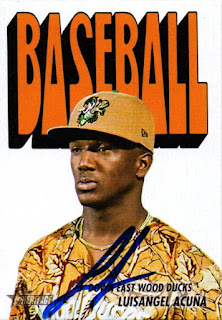 The minor league season is up and running, and I have already put my first road trip to bed for the season.  I picked up my friend, Alex, in Richmond last Friday night, and we stayed at my parents' farm Friday night and Saturday night with the intention of checking out the Hickory Crawdads at Winston-Salem Dash. 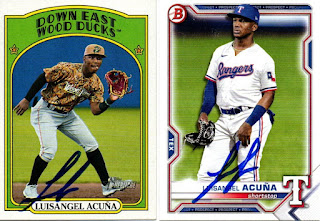 I used the opportunity to visit family, as well, since I have a new niece.  Poor Alex got a crash course in just how large my family is.  I was also happy that Hickory was in Winston, since most of the Wood Ducks from last season moved up to Hickory.  We sat on the Hickory side both games, and reconnected with a bunch of the guys, like Cody Freeman, Nick Krauth, Mason Englert and Owen White.  Carlos Cardoza, manager of last year's Woodies, is now managing the Crawdads, and noticed me when he was coaching third about halfway into Saturday's game.  He came over after the game to chat and thank me for coming out.  My sister and her husband also came to the Saturday game, and were able to meet Cody and some of the other guys.
I was told by one of the players that I had missed Luisangel Acuna; he had injured his hamstring during the Friday game and had been sent back to Arizona.  Luckily, Acuna hadn't actually left yet, and I was able to get him to sign the above cards on Sunday after the game. 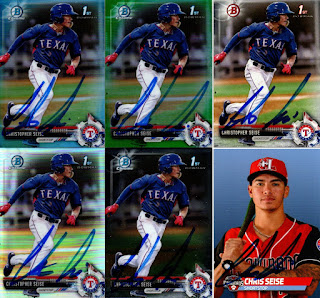 I was really excited to finally get some Chris Siese cards signed, since he never made it to Kinston.  He had been hurt much of the last several seasons, and when the leagues flip flopped, I knew it would be tough to get him. 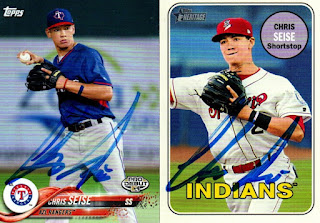 I had even tried to get Siese TTM, but those cards were returned to sender.  They ended up getting signed, though.  I made sure those were the first cards in the auto book since they had so many miles on them already.

TK Roby wasn't at the Wood Ducks for long last season, and left before I could get the above Panini Prizm cards signed.  I found the above 2020 Bowman First Edition blue foil at a show in the offseason and was happy to move it into the autograph album. 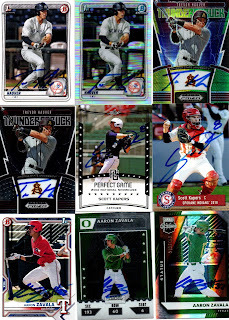 I had the 2020 Bowman and Panini Prizm Trevor Hauver cards left over from missing him last season when I traveled to Hickory.  They got out of the Box of Shame and finally got signed.  I didn't realize I had any Scott Kapers until I was looking for someone else in my Spokane team sets, so I bought his Perfect Game card in a lot of 3.  My friend, Gerard, ended up getting one of them, and I'll use the other as trade bait, probably.  I didn't have any cards of Aaron Zavala until after last season was over, so it was nice to finally add him on a few cards. 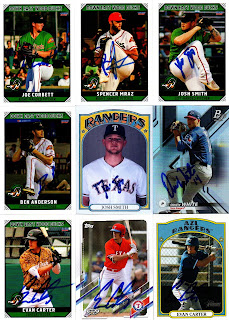 Since Hickory is so tough to get pitchers at home, I was really glad that I could add some of the team set guys to the album.  I had help from Nick Krauth, who sent Joe Corbett and Spencer Mraz over to sign for me.  Nick is such a good guy.  I wish he had cards.  I got Owen White on the one different card that I didn't have during the season, the Bowman Platinum.  I also got Chris's signed, even though Owen had told Chris over social media that Chris could send to him TTM any time.  Chris and Owen have gotten close, and talk quite a bit.  Owen was disappointed that Chris had to work that weekend, bur I promised that we would come out to Hickory in June and see everyone. 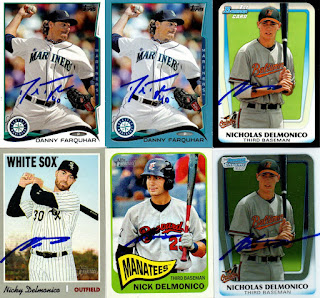 Because I wanted to spend time on the Hickory side, I didn't bring much for the Winston-Salem guys.  I had James Beard cards in the book, but he had gotten sent to Kannapolis; and we missed Matt Thompson.  Thankfully, I was able to finally add Danny Farquhar and Nicky Delmonico.  My friend, Max, had gotten a couple Delmonicos signed for me a while back.  I had missed Farquhar last season, and misplaced a 2014 Topps Red Hot foil, which I found this past week when I wasn't looking for it.  Story of my life. 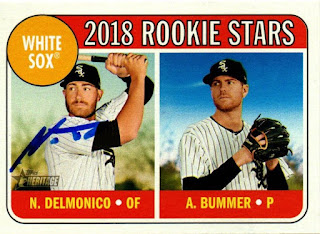 I had a great time, and it was even better because I could see some of the players who we saw last season and had gotten close to.  I wish Chris could have gone to the games, but he will have more time this summer when tennis is over.  Stay tuned to see the rest of the graphing I did this past week.

Posted by William Regenthal at 12:29 PM