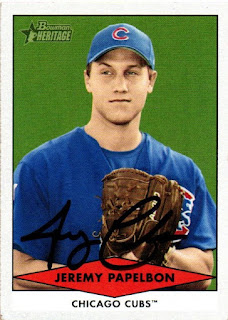 He isn't nearly as famous as his brother, but I was still excited to get a few cards back signed TTM from Jeremy Papelbon.  The above 2007 Bowman Heritage turned out well.  I have a small handful of these, and they look great when signed.

I was also really happy to move some of these 2007 Bowman, and they all turned out great.  I have a bunch of 2007 Bowmans, and am happy to get them signed.

He is the brother of former Red Sox closer, Jonathan Papelbon.

Posted by William Regenthal at 8:02 PM

Knew the Paplebon Dad when I was in the restaurant biz, he gave me Jonathan's first RC.