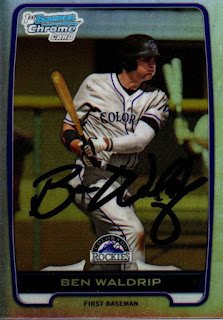 Here is a card that I found in the boxes that I got from my former LCS.  I had looked to see if Ben Waldrip signed TTM as I made a pass through the boxes, and saw that he did.  So, this 2012 Bowman Chrome refractor was sent off for signature.  The card turned out great.

Posted by William Regenthal at 5:28 PM