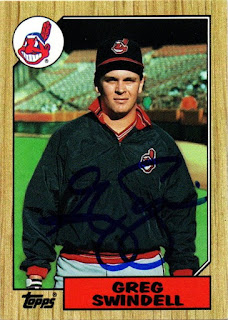 Here's another 1987 Topps that dropped off of my list.  A private signing came up for Greg Swindell, and I took advantage so I could cross him off of my list.  The card looks great and puts me closer to my goal of completing the set.  I am almost at 700 signed cards, which is a feat in itself.

Posted by William Regenthal at 7:29 PM