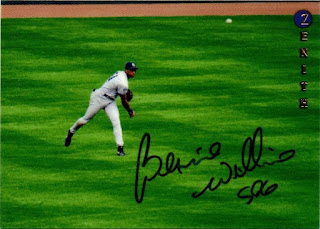 This 1997 Zenith Bernie Williams is a card that was at the very top of my list of cards I really wanted to get signed and into my autograph album.  I had found it a while back at my former LCS when they allowed me to look through boxes in the back room.  Since then, I was able to get all of the 1997 Zenith cards that they had, but I didn't know that I would be getting them at the time I found this Bernie.

The card is amazing, and frankly, the set is awesome.  There may be one or two cards in the set that I probably wouldn't spend money on to get signed, but most of them have great shots, and would be worth sending off.  So, I put this card aside and waited until I saw a Bernie signing, and when I did, I jumped all over it and sent the card off.

Posted by William Regenthal at 9:39 PM