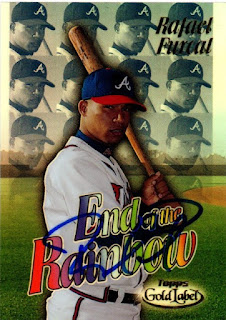 This 2000 Topps Gold Label Rafael Furcal was an insert card in a box of 2000 Topps that I picked up when I was building that set years ago. It floated around my boxes for a while, then I saw a private signing come up. I naturally picked this card to get signed and it turned out great.

Posted by William Regenthal at 6:52 PM