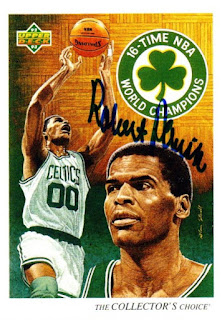 There aren't many basketball cards in my autograph albums, but some do exist in there.  I was able to move a few basketball cards from the boxes I got from my former LCS with this TTM success from Robert Parish.

Might as well get a Hall of Famer if you're building up the basketball portion of your collection!