Another TTM Success From Don Mattingly 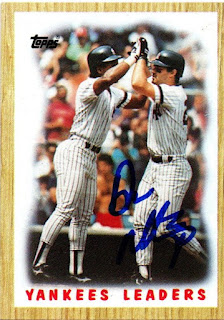 The plan was simple.  Try to get this 1987 Topps Yankees Leaders card signed by Don Mattingly before I went to the National, so I could get Rickey Henderson while I was there.  I sent one of these cards to Marlins Spring Training in February 2020 (as I had several Spring Trainings before that), then the season was canceled, as was the National.  I sent another card to 2021 Marlins Spring Training.  No luck in a return.  Finally, I saw a private signing pop up with Mattingly, so I decided to send the card off, so it would be back in time for the National.  Of course the card came back signed, but Rickey was not at the National this year.  Oof.  So, I will either have to jump on a private signing for Rickey that just popped up, or try to wait and see if he is at the National in 2022.  Tough decision.  I probably will go ahead and mail it off to the signing and get the card secured in my album so I can cross it off of the list.

This will be very cool when Rickey signs it!