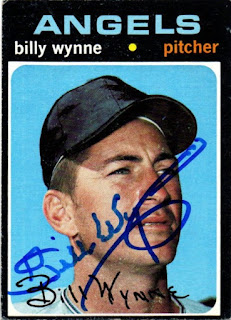 This 1971 Topps Billy Wynne is a random card I found in my boxes.  I checked to see if Wynne signed TTM, he did, and I sent the card off.  He's got a pretty nice signature.  The card is also cool due to the airbrushed hat he's wearing/