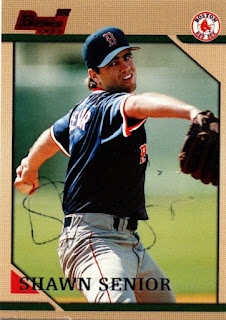 Before I got this 1996 Bowman back signed TTM from Shawn Senior, there were no logged requests or successes from him on SCN.  So, mine was the first.  That was kind of cool.  Since then, one other person has gotten their card signed, and a third person has sent theirs off and are waiting for their success.

My card was signed in ballpoint pen, and the signature isn't all that great, but I did get a 1996 Bowman added to my album.

Posted by William Regenthal at 10:07 PM