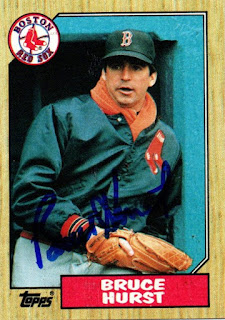 There seems to have been quite a few private signings lately, which have helped me shave some much-needed cards off of my checklist for my signed 1987 Topps set.  Another one came up recently, Bruce Hurst, and I was able to cross him off and rest the card in my album.

Posted by William Regenthal at 5:50 PM