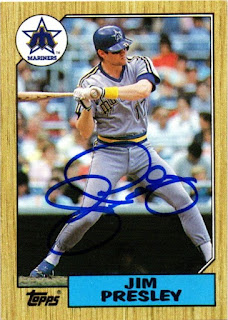 Yet another 1987 Topps was removed from my list via a private signing when I got this one back from Jim Presley.  He is apparently a bit of a tough signer, so I was glad to cross him off of my list.

Posted by William Regenthal at 6:40 PM