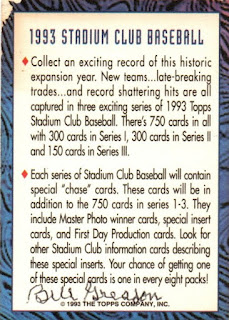 There is an assortment of generic cards that I keep handy in order to send to folks who normally don't have cards.  In the case of Bill Greason, I had this cool Topps Stadium Club ad card that would have looked cool, had Greason signed the front.  Still, he did sign my card, and his autograph has been added to my album. 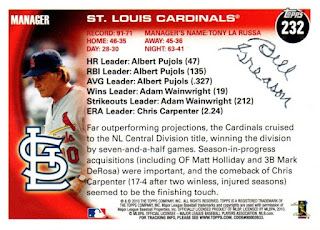 I also had sent Greason a 2010 Topps Cardinals team card.  He signed the back of this one as well.  I'll keep trying with guys like this, but some signatures on the fronts of the cards would have been nice.  I'm honestly just happy with a response.  TTMs got pretty dry this summer, and any return was welcome.  Things have picked up lately, but the goal is to catch up on posts before the year is out.  We'll see if I can reach that goal.

Posted by William Regenthal at 10:10 PM

Still very cool to get an auto from a Negro League player. What was on the front of the Stadium Club card?