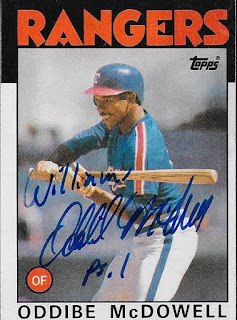 I waited a while for these to come in, and when they did, the only disappointment I had was that my 1987 Topps wasn't returned signed.  Oddibe McDowell signed three of the six cards I sent, and kept the three unsigned ones.  I will have to try him another time if I want the '87 back.  I like the cards he did return, though.  Nothing wrong with a 1986 like the one above. 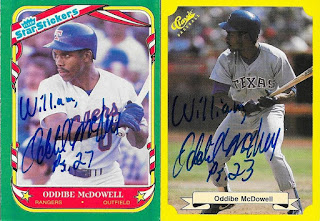 He inscribed each card to me and included a bible verse, which was a nice touch.

I mailed to McDowell on February 18 and got the cards back on September 21, for a 215-day TAT.
Posted by William Regenthal at 5:20 PM