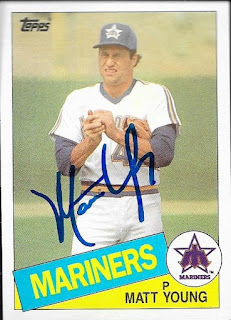 I added a couple cool cards to my album with this TTM success from former pitcher, Matt Young.  I was able to get two cards from the 1987 set signed, and this nice 1985 Topps. 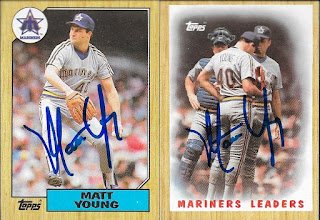 Some of the team leaders cards are a bit difficult to figure out who is on the card, but this one was really easy.  I'm glad to be able to knock off two cards with one TTM success.

I mailed to Young on September 1 and got the cards back on September 15, for a 14-day TAT.
Posted by William Regenthal at 7:36 AM