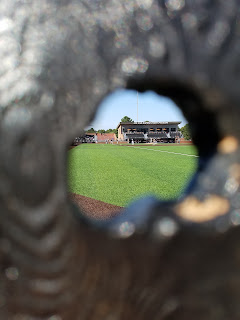 This was a really interesting Labor Day Weekend.  I started the weekend with the plan to go see one game at Buies Creek on Saturday, since Brett Martin was starting that day for the Wood Ducks.  Rain on Friday forced a double header for Saturday, so that changed our plans to catching two games that day.  Leading up to this series, the Wood Ducks had gone on a tear, while the Astros were floundering.  With playoff implications on the line, we set out for Buies Creek Saturday.  I printed off a copy of the photo of Chris with Wood Ducks pitcher, Emerson Martinez, since Emerson had asked for a copy.  We got to Buies Creek early and mistakenly found the locker room door, since I parked in the wrong place.

Kelvin Vasquez was outside and said hello to us.  I asked him if he minded giving the photo to Emerson, since we were right at the door and he wouldn't have to keep up with the photo in the dugout.  Kelvin doesn't speak a whole lot of English, so he went inside and got Emerson.  Emerson thanked Chris and I for the photo and asked me if I had tickets for the game yet.  I didn't, so he put us on "the list" and we got in to the double header for free.

Emerson started the first game, with the Wood Ducks needing to win 3 of the 4 games in the series.  They lost the first game 1-0 in 7 (in the minors, all double header games are 7 innings) on a hit by pitch with the bases loaded.  Brett Martin pitched the second game and the Woodies won 5-2.  They won again on Sunday, 7-3, putting them a half game behind Buies Creek with one to go for the second half title for the Southern Division.  We weren't even going to go to the Sunday game, but Jeremy Moore told Chris that if we came, he would take Chris on the field again.  Chris was able to go on the field, and they even put the catcher's gear on him.  Jeremy took him in the dugout and everyone high-fived Chris and hugged him.  They were really happy to see us.

Today, they won 10-3 and clinched a playoff spot.  It was a really cool feeling to see the guys I have followed all season celebrate clinching, after how poor their record was earlier this season.

One of the best parts of the series was that I got to hang out with a fellow Instagrammer, Jackson, for the duration of the series.  He is a really great guy, and has been following me on there since I got started.

I did do some graphing across the series, and also picked up a Buies Creek team set. 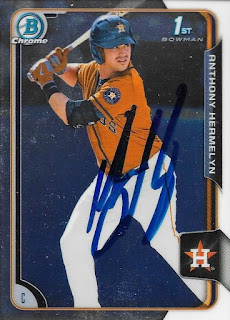 I had gotten Anthony Hermelyn on a few cards earlier this season, but found a few more at the National that I could work on. 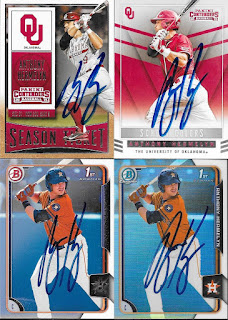 I got three different versions of Anthony's 2015 Bowman, and they all turned out great.  He stopped and talked to us each day. 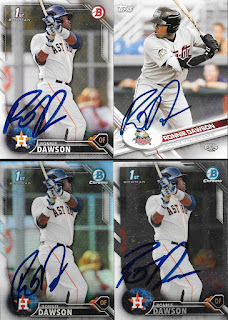 Ronnie Dawson was really friendly, as well.  He was also very funny in the outfield, interacting with the Wood Ducks bullpen. 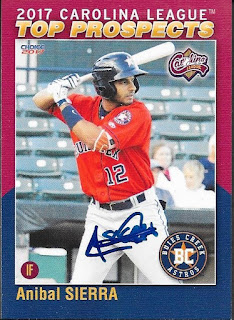 I got this card of Anibal Sierra taken care of from the Carolina League top prospects set.  He was really nice, but spoke no English. 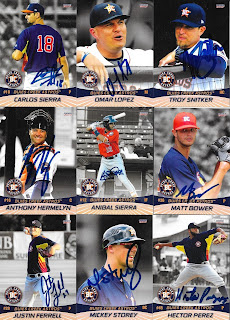 I also got 10 cards signed from the Buies Creek set.  A lot of the players are no longer with the team, so it;ll be tough getting some of the guys. 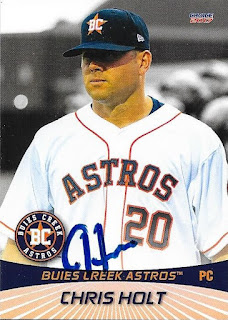 Jackson said that Chris Holt was one of the toughest autos to get from Buies Creek, so when I was able to call Holt over on Sunday and get my stuff signed along with Jackson's, he was really happy. 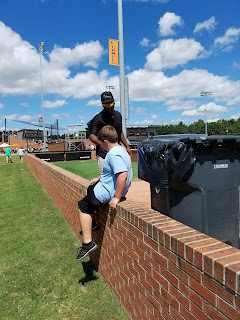 Here are some photos I took during the trip.  Here is Chris being brought back to me from Jeremy Moore.  He loves this team, and is really excited that there is some baseball left to be played this season. 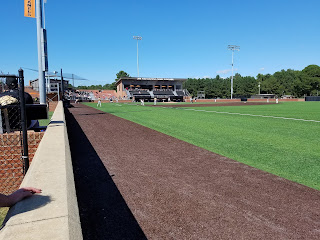 The Astros play at Campbell University, which has an odd field.  Everything is Astro turf, for some reason. 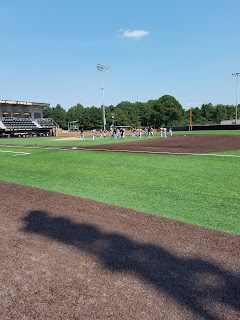 Here are the Wood Ducks celebrating after the final out today. 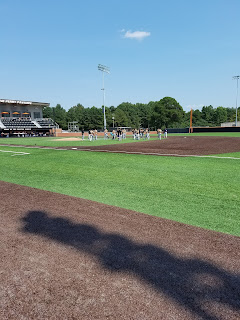 Some more celebration on the field. 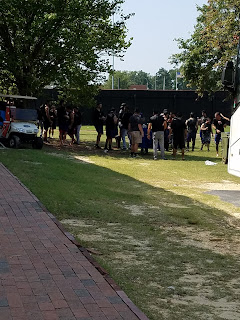 We were able to catch a bit of the celebration as it was unfolding near the locker room.  I didn't want to get too close, since it was roped off.  At one point, one of the players motioned for us to come over, but I stayed put, since I didn't feel it to be right to crash their party. 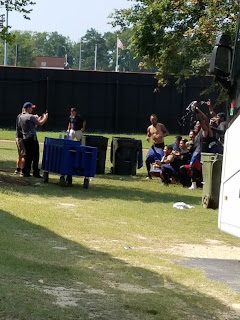 It was a really cool sight to see all of the guys cutting loose and celebrating.  This has been a really awesome season, especially for it to be an inaugural season for the club. 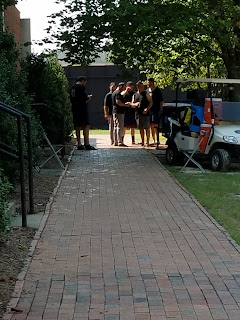 We did have some players come over to us and shake hands and say hello.  Brett Martin came and chatted a bit, as well as Adam Choplick, Steven Bruce and Ledarious Clark. 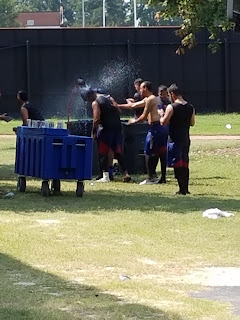 I think they wore more of the beer and champagne, than they ingested.  They also had a lot of fun with the water hose. 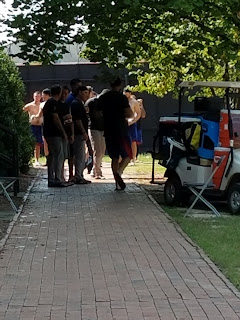 At one point, Jeremy waved at us, and Chris waved back.  Emerson saw us as well and waved. 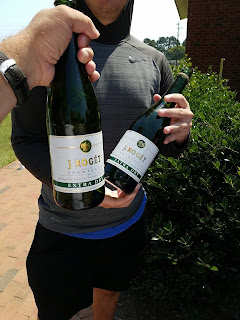 The coolest part was our friend Matt, the ballboy/clubbie hooked Jackson and I each up with one champagne bottle.  This is going in my display case, for sure!

This was such a cool series, and I was really glad that I decided to make the trip, especially for today's clincher.  The players seemed legitimately happy to see Chris and I, which made us feel really good.  I got a hug from Emerson Martinez after the second game on Saturday.  Luis La O shook my hand and called me Papi today.  I am so happy for these guys, and I hope they can keep it going.  They begin their series against Myrtle Beach on Wednesday at home, and I will be there.
Posted by William Regenthal at 10:09 PM