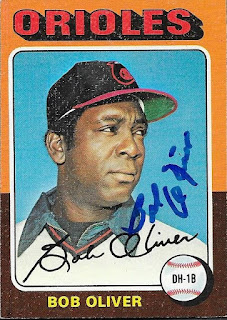 I was able to get one of the cards that Max gave me a long time ago signed with this TTM success from Bob Oliver.

Oliver's signature wasn't all that great on this card, but I'm still glad I was able to add this 1975 Topps to my album.

I mailed to Oliver on August 7 and got the card back on September 5, for a 29-day TAT.
Posted by William Regenthal at 11:03 PM