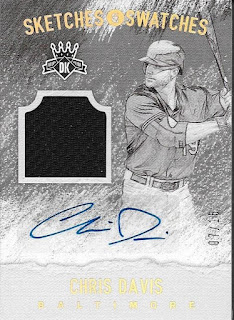 I got a huge package in the mail a while back from my good friend, Nate, that was an early birthday present.  In it was this Chris Davis 2017 Panini Diamond Kings Sketches Swatches card.  I had no idea it was coming, of course, so when I saw one of these cards on Ebay, I had to buy it, then I found another at the National.  So, now I have 3 of these.  They look awesome, so that's ok. 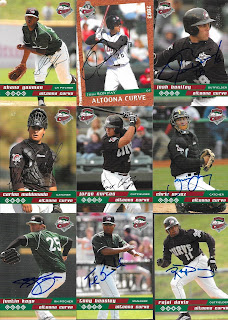 Nate also included a bunch of Altoona Curve signed cards that he was able to get in person a long time ago, which was pretty nice of him.  They will go in my autograph album like the other IP cards that I have. 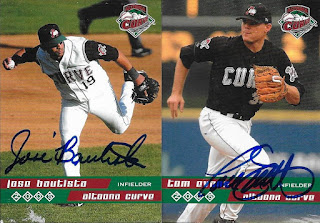 The most interesting card was this Jose Bautista auto that Nate had.  It is THE Jose Bautista.  The one I can't stand.  Still, it is a pretty cool signed minor league card, nonetheless.

Thank you so much for the birthday package, Nate!  I loved everything, even though I can't stand Bautista.
Posted by William Regenthal at 8:08 PM