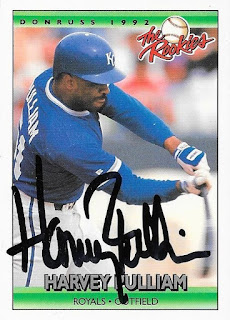 I added a few early 90s cards with this TTM success from Harvey Pulliam that I received.  This 1992 Donruss The Rookies turned out really nice, I think.  The card came out of one of the boxes that I got from my mom a while back.  It was in a pack that had been opened at the former card shop, then put away.  It's cool to have pulled it years later and sent it off for an auto. 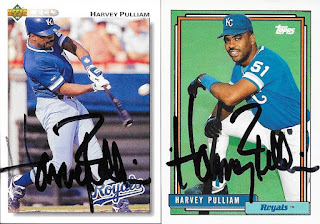 These two cards are pretty plain, but they still are nice ones to add to the album.

I mailed to Pulliam on August 5 and got the cards back on September 5, for a 31-day TAT.
Posted by William Regenthal at 3:46 PM