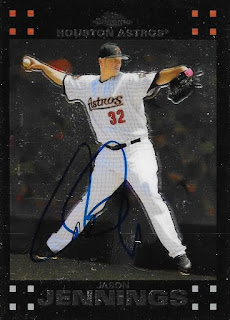 I don't have nearly as many signed cards from the mid-to-late 2000s as I do of cards from the 80s or 90s.  It just seems to be a bit harder right now to find guys out of those sets who sign.  Luckily, I was able to get a TTM success from former pitcher, Jason Jennings that helped take care of a few needed sets for my album.

This 2007 Topps Chrome turned out a lot better than the scan shows.  His choice of a thin blue Sharpie worked out well with the cards that I was able to get back signed. 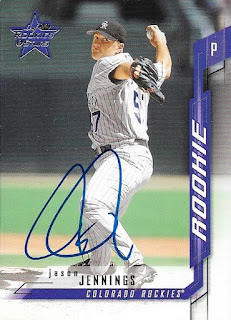 I really like it when I am able to find cards in my boxes and am able to send them out.  Like finding this 2001 Leaf Rookies and Stars.  I'm not sure where it came from, but I imagine that the card came from a repack box or something way back when.  I still like to pick those up from time to time when I see them.  Nothing wrong with a good repack, especially if you are looking for oddballs for graphing. 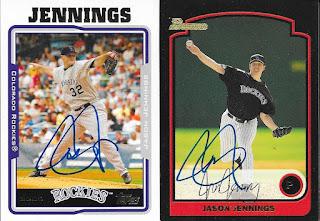 I added a Topps card to my autograph project, and also a Bowman that I don't think I had in the album.  I was still several years away from busting Bowman boxes when 2003 Bowman came out.  I probably got this one from a repack as well.