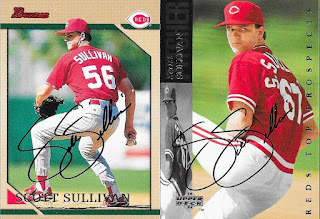 This was a really nice return from former pitcher, Scott Sullivan.  I had these four cards signed, beginning with the above 1996 Bowman and 1994 Upper Deck Minors.  I liked his choice of a thin black Sharpie, as it really complimented his signature. 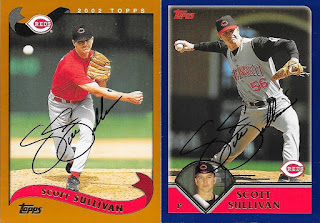 I added more cards from 2002 and 2003 Topps to the autograph binder, which was nice.  They both turned out great.  He also wrote a note on the back of mine, and signed that, too!

I mailed to Sullivan on August 7 and got the cards back on September 1, for a 25-day TAT.
Posted by William Regenthal at 5:41 PM