Orioles Relics and Autos From The National 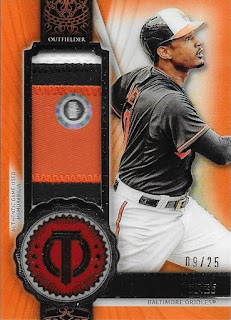 There are, by far, not all of the relic and auto cards I picked up at the National.  I hit some of the bargain bins pretty hard the whole time I was there and ended up with some really nice cards.  This 2017 Tribute Adam Jones patch was probably the best of the bargain bin finds.  Numbere 9/25, it has a 3-color patch that looks pretty great. 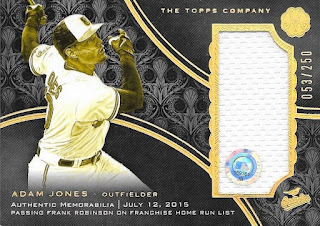 This Adam Jones relic was also pretty cool.  I was glad to find some of his stuff for cheap at the show, since I haven't added a lot to the Jones PC in a long time.  Jones has been with the club since 2008, and has begun to pass some Oriole legends in some of the all-time stat rankings.  I hope he can finish his career as an Oriole, but that remains to be seen. 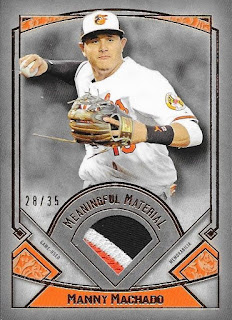 I thought it was pretty odd to find a Manny Machado patch in a bargain box, but this one was in there.  Since I love Museum so much, I picked it up.  I don't remember what I spent, but it wasn't much at all, and I am pretty sure I got it in a bulk deal with some other stuff anyway. 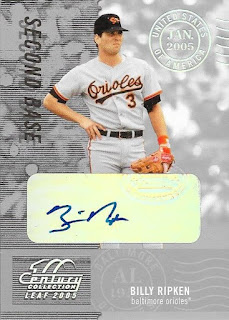 Finally, I added this Bill Ripken certified auto from 2005 Leaf Century Collection.  The card is numbered 63/250.  I believe this is only the second Bill certified auto that I have been able to find.  The other being the Cal/Bill dual auto that Drew got for me a while back.

I looked at my stack of National finds today and realized that I am just about done posting about the show.  I'm not as far behind as I thought I was.  Maybe I can get the rest posted soon and move on to other things.
Posted by William Regenthal at 9:43 AM