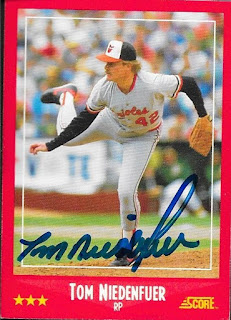 I added a former Oriole's autograph with this success from Tom Niedenfuer.  This 1987 Score turned out really nice, as is usually the case with this set of cards.  Niedenfuer actually has a pretty great signature.  I don't know it to be fact, but I feel like some of the guys with long last names have pretty nice signatures.  Maybe we should take a look at some of the best signatures at some point.  Maybe when I have some time. 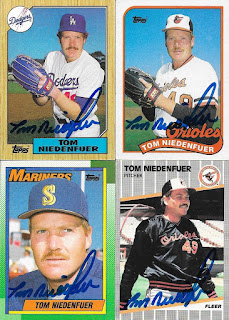 I added three different Topps cards, including a requisite 1987 for the collection (as of today, I am up to 80 signed cards from the 1987 Topps set).

I mailed to Niedenfuer on August 29 and got the cards back on September 9 for an 11-day TAT.
Posted by William Regenthal at 7:11 PM