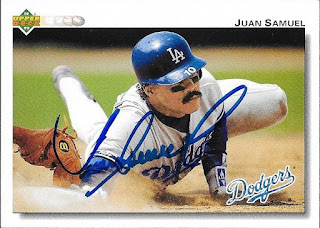 I feel like horizontal cards look the best when signed.  When it is an action horizontal card, they really shine.  This 1992 Upper Deck Juan Samuel that I got recently might be one of the all-around best looking autos/cards that I have seen so far.  Samuel's signature looks awesome, and really fits the card well.  This is a great example of being able to take a junk wax era card and reapply putting some purpose behind it. 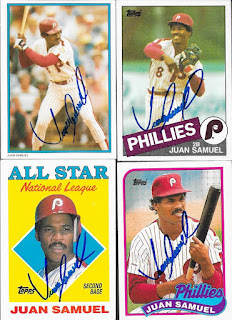 Samuel also managed 51 games for the Orioles in 2010 where he went 17-34.  He was replaced by Buck Showalter, who has managed the Orioles since.

I mailed to Samuel on April 20 and got the cards back on May 20, for a 30-day TAT.  I sent the cards to Citizens Bank Park.
Posted by William Regenthal at 5:53 PM