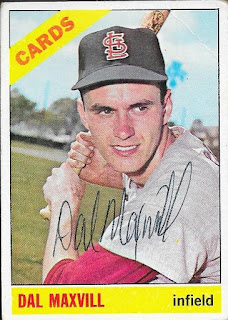 I added a signed 1966 Topps card to my collection when I received this card from Dal Maxvill on May 6.  I had mailed it off on March 11, which means I waited 56 days to get it back.  I'm glad I did, because it made only the second 1966 Topps card that I have gotten back so far.