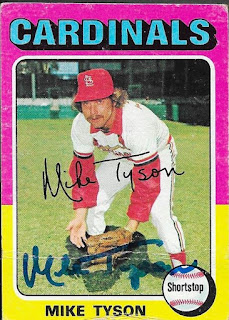 Stepping away from the 1950s era players for a bit, I got a few 70s guys in recently.  One of which has a pretty famous name, but no, I didn't get an auto from the former boxer, Mike Tyson.  I got the former infielder.  Here is a 1975 Topps card that I got from my buddy, Max.  It was damaged in transit, but still looks cool signed. 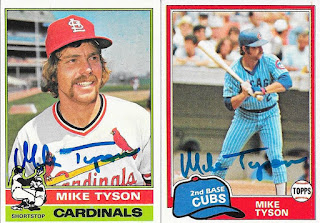 I also got the 1976 and 1981 Topps cards of his signed.  I liked the '81 because of the old Cubs uniform.  The signature smudged a bit on that one, but in all, the cards turned out great.  I can't complain.