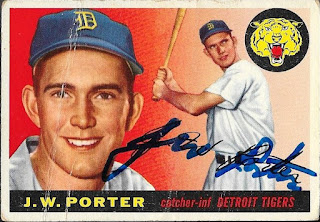 I got a really awesome TTM success from J. W. Porter recently that came with a really nice full page letter.  I got this 1955 Topps from the Columbia antique shop back in April, along with the 1959 below.  The '55 is beat up, but it still looks cool signed. 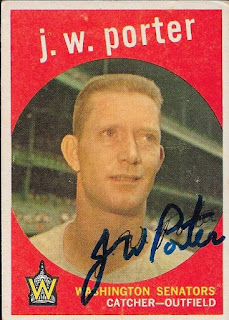 Porter's letter was really awesome.  I'll try my best to decipher his handwriting:

Dear Wm.
Thanks for your nice letter.  I will try my best to answer your questions as best I can and throw in 2 extra cards as well.

I live 5 miles from the stadium where the Cards and Marlins share their training camp and until my legs went bad and couldn't work, I worked there.  That was from 1998 until 2012.  I'm still there 3 or 4 times a week as a fan since both sponsor class A teams.  They and the Tigers are my favorite teams.

My favorite players are Miguel Cabrera and Giancarlo Stanton, probably because I saw them up close and personal on their way up and 6 weeks every spring training.  My favorite pitcher is Jose Fernandez.  I expect all 3 to make the Hall of Fame.

I grew up in Garland when I was in AAA ball, there was no TV of Major League games, so Coast Leagues were my favorites including 2 who shoes I shined as their club house boy and later roomed with with them in the Majors.  They were Gene Bearden and Ferris Fain.

Hard to answer about which pitcher I would have wanted to catch the most as I did catch Satchel Paige, Jim Bunning, Billy Pierce, Lew Burdette and Warren Spahn.  Cy Young at his best I guess would be high on the list!  I caught Bob Gibson, too.

Thank you for the nice letter and God bless. 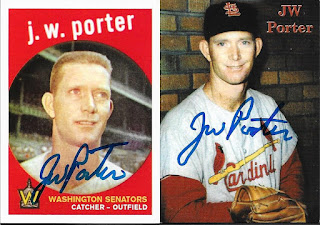 Here are the two cards that Porter threw in.  I thought that was a really nice gesture!

He, along with Owen Friend and Bob Nieman, were traded by the Browns to the Tigers in 1952 for Virgil Trucks, Johnny Groth and Hal White.