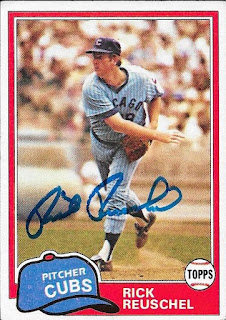 I got a really cool TTM success from former pitcher, Rick Reuschel.  I was able to get a bunch of cards signed by him, like this 1981 Topps.  I got this card from the Columbia antique shop and loved the old Cubs jersey.  My decision to send this one was an easy one. 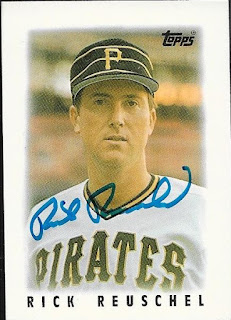 This 1986 Topps mini came out of one of the boxes that my mom picked up for me a while back.  I like the way these look, so getting this signed was a no-brainer as well. 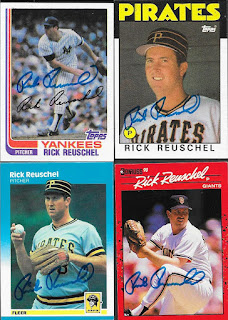 I was also able to add these cards from Reuschel as well.  Since I saw that he signed a bunch of stuff, I was able to put a few cards in the envelope that I probably wouldn't normally have put in.  I loved the 1990 Donruss set, so I was happy to find one of his cards from there and put it in.  The 1986 Topps and 1987 Fleer also came out of the Mom Boxes.  That 1987 Fleer turned out great with the blue Sharpie on the blue bordered card.