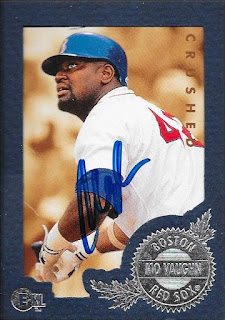 Here is a pretty huge TTM success that I got not too long ago.  I really wasn't expecting much, but was pleasantly surprised when these two cards finally came in.  First is this 1996 Fleer E-XL.  The card got somewhat damaged in transit, with the blue matting separating from the card a bit, but when it is placed in my album, you won't be able to tell. 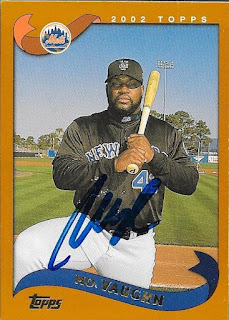 Also, here is the 2002 Topps that I got signed.  I actually sent this card off before I decided to do my Topps Autograph Project, but it will fit in nicely with the plan.  Additionally, I had completely forgotten that Vaughn wore uniform number 42 long before it was retired all across baseball.