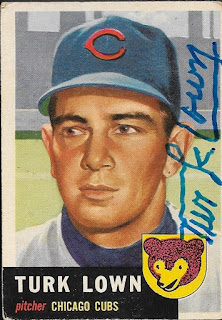 My TTMs are starting to dry up, it seems.  Fewer and fewer are rolling in, but I actually see that as a good thing.  This has allowed me to get closer to getting caught up on posts lately.  I am still way behind, but there is a light at the end of the tunnel; until the National comes.

Here is another 1953 Topps that I was able to get signed.  I sent this off to Turk Lown, along with his $20 fee for a signature.  Normally, I would have let that fee scare me away from trying to get a card signed, but when I saw that he donates all of the money to cystic fibrosis research, I felt like I was doing a good thing.  I mailed to Lown on May 2 and got the card back on May 21, for a 19-day TAT.