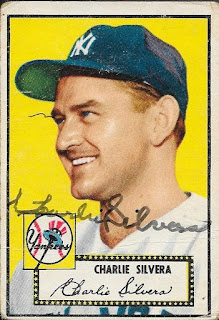 I am officially caught up with my TTM posts!  I still have a bunch of cards that have been sent out into the world that have yet to return, but my TTM stack "to be blogged" is now caught up.  What better way to catch up than to have a success from a 1950s-era player!  Here is a nice 1952 Topps signed by Charlie Silvera.  I was really excited about this TTM because he actually played in the World Series that my grandmother attended (1949). I hoped that Silvera would put the 1949 WS Champs inscription, but he didn't.  That's ok, though, the signature still looks nice! 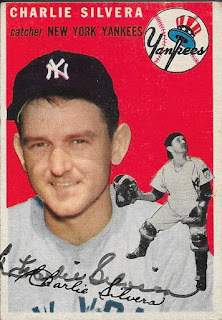 Here is the 1954 Topps card that I was able to get signed.  It turned out great, as well.  I got all three of these cards from the Columbia antique shop.  I still have a couple cards that I am waiting on that I got from there, but overall, my buying trip back in April was a huge success. 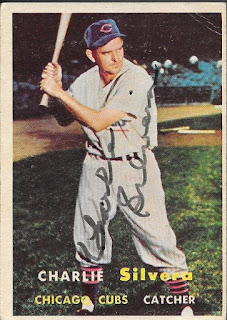 I spent a good bit on all of these 1950s cards, but have had great success in getting them signed.  I'm really glad I took the plunge and tried some of these out.